The Statue of Liberty and Freedom 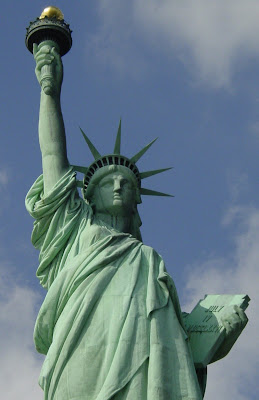 The Statue of Liberty.
A symbol of friendship and democracy between France and America.

Did you know that the Statue of Liberty was made by a French sculptor and was a gift from the French people to the American people?

Her official title is Liberty Lighting the World. She is the most recognizable monument and symbol of democracy and freedom that is recognized throughout the world. She commemorates liberty and friendship between France and America.

The Statue of Liberty was constructed in Paris by French sculptor, Frederic-August Bartholdi (1834-1904) and 50 workmen. He began work on her in 1871. She was transported to the United States in 350 individual pieces in 214 crates. She was reassembled in four months time and erected on Liberty Island, New York. She is supported by an innovative metal framework by Gustave Eiffel, the designer of the Eiffel Tower.

Lady Liberty's base is 65 feet high, her pedestal 89 feet high and she is 151 feet and one inch to the tip of her torch. She proudly holds a torch in one hand for freedom and clasps a book of laws in the other inscribed with the date July 4, 1776.

On October 28, 1886 thousands of spectators watched as she was presented and dedicated in a ceremony to the United States of America. 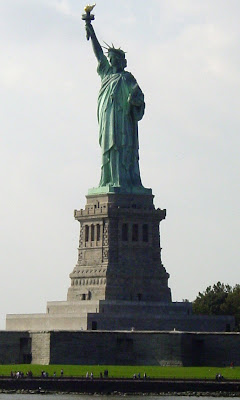 The Statue of Liberty
Liberty Island, New York
The French people intended the Statue of Liberty to represent the French contribution to American independence. That original intent seems to be lost and unknown to many. Instead the Statue of Liberty gained fame as a sign to immigrants from all over the world as a promise of a new life in America and a symbol of political freedom.
To me the Statue of Liberty symbolizes freedom. In 2005, I took my oldest nephew Taylor to New York City. We stood in line forever to make the ferry journey across the harbor to see Lady Liberty in person. I'm glad we did. Now I know how my ancestors from Europe felt as their ship pulled into the harbor on their way to Ellis Island. I can only imagine that when they saw the Statue of Liberty and the United States of America for the first time, that one thing came to mind. Freedom.
Posted by Unknown at 12:51 AM