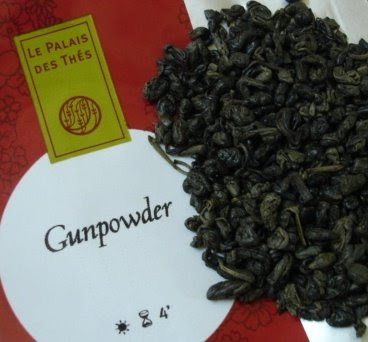 I had never heard of Chinese Gunpowder tea until I experienced Moroccan mint tea in London. After London we took the Euro Star over to Paris. I decided to buy my Chinese Gunpowder tea in Paris at Le Palais Des The's (the' is tea in French). They are famous for the finest teas imported from all over the world.

Chinese Gunpowder tea is a green tea from the Zhejiang Province in China. It's production dates back to the Tang Dynasty (618 - 907). In Chinese it is called Zhu Cha. In English it is called Gunpowder because the green leaf is tightly rolled into a tiny pellet which explodes into a long leaf steeped in hot water.

It is popular world wide. It is a staple in North Africa for the traditional preparation of Moroccan mint tea.
Buying: A tip when buying Chinese Gunpowder tea is to look for shiny pellets. This indicates that the tea is fresh.
Brewing: Steep 4 minutes.
Try the wonderful teas at Le Palais Des The's and let me know what you think!
Posted by Unknown at 9:21 PM