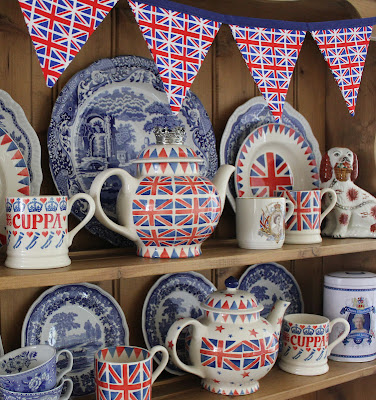 Every Diamond Jubilee celebration needs a
Union Jack bunting...
and I've got mine!

Whenever I travel to England
I love seeing Union Jack buntings everywhere
from the "quaintest" tea rooms to the most regal "high street" shops.
Last year in England, I almost bought a Union Jack bunting until I read the package and saw that is was out-sourced and made in China.  I just couldn't bring myself to buy it.  I'm so glad I didn't buy it because I recently discovered a brilliant bunting shop on Etsy called,
Betty and Barclay.

The moment I saw Betty and Barclay's buntings,
I knew the owner had to be British.
Sure enough she is and Carol James is a retired Brit,
now living in France.
When Carol's not busy sewing her adorable buntings
she's out scouring the French countryside for vintage treasures
to sell in her other Etsy shops,
Le Moulin Bleu  and Chateau D'Aulnay 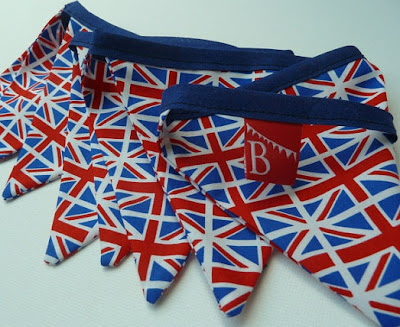 Since most Americans are not that familiar with buntings,
I asked Carol to explain what buntings are and tell us a bit about her buntings.
Here's our chat:


Carol, can you explain what a bunting is and how they are used?
CJ)  Buntings originated in Suffolk, England in the mid 1800s and were traditionally used by the navy for signalling purposes and even today the ship's officer in charge of communications uses flags known as a "bunt".   As time went by the flags then moved on to being a decoration for boats and yachts with colors being red, yellow, blue and green. Buntings then became popular with patriotic celebrations, moving on to home party decorations and now today to being home decorations for use all year...celebrating or not!
I had not thought of hanging bunting myself until last year when I was hosting a family birthday party.  It was October, full of the colors of Autumn and so I decided to hang two of my "fall buntings' and seven months later they are still hanging because I find them most cheerful and mesmerising...maybe it's time to change to summer ones?


How did you become interested in making and selling your signature line of buntings?
CJ) Just over a year ago my niece was getting married and commented that she would like to have bunting but it is so expensive....I like sewing so thought I would make her some as a surprise. I looked on the Internet and was surprised at just how expensive buntings can be so thought I'd have a go at trying to sell some.
One of my first buntings was my Nautical Navy and White Stripe Bunting.   I thought as bunting has its origins with a naval theme this would be a good one to start with and it has become my most popular bunting...I don't know exactly how many I have sold but I have used about 50 yards of fabric now so it is quite a lot!  Three orders have been for "nautical themed" weddings and my nautical buntings have been featured in over 100 Etsy Treasurys.

Do you have any tips on how to decorate with buntings?
CJ)  In my experience, I always think that buntings look better when hung in a space as opposed to being flat against a wall...say from one wall to another across a corner, not flat against the wall.  The uses for buntings are endless but I always say that "less is more" if you choose colors correctly.   You don't need loads of bunting to make an impact in rooms where you might need a lot of buntings.  For example, say if you were going to fill a marquee for a party, decorate a shop, a tent stall, across a street, etc.  then certainly bunting with spaces in between the flags is so much better...not so much like shark teeth!  Also, fewer flags are needed and the cost of the banner should be less expensive.  I've made all sorts of buntings from a New York fashion show with 300 yards down to a string of five little flags for a baby's  room.  I make many customized buntings which is always a pleasant challenge!

Because I always have to ask, are you a tea drinker?  If yes, what's your favorite "cuppa"?
CJ)  Yes, I am a tea drinker...although since living in France I have become a coffee drinker, too.  Coffee or tea, it has to be made in the correct way.  Coffee is always freshly percolated and I am still experimenting and trying new flavours and densities.  But tea, well I'm English and have always been a tea drinker.  I have English Breakfast in the morning and in the afternoon Earl Grey.  Tea is most definitely the most refreshing drink...only in a cup and in a pre-warmed pot!
Love that! 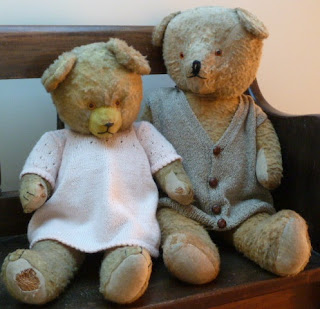 Who are Betty and Barclay?
CJ)  Betty and Barclay are the names of my vintage Teddy Bears!
Barclay was found at an antique fair in England.  He was under a stall with his head in a polythene bag...we had to rescue him!  A year later we found Betty with a broken neck and torn ear...another rescue and a mate for Barclay!

Carol, what a pleasure getting to know you
and "thank you" so much for taking the time to chat about buntings.
I can't wait to get more of your buntings for other celebrations!