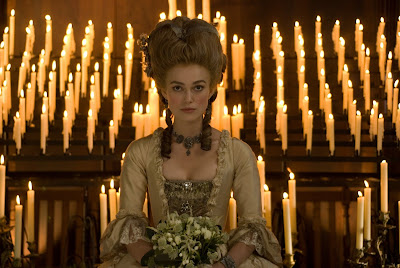 The Duchess Movie
Have you seen The Duchess movie? Teased by the movie trailers for weeks now, I could wait no longer. I drove over 100 miles to see The Duchess last Friday when it opened in the SF Bay Area. Let me just say...it was worth the drive!
The movie is based on Amanda Foreman's biography Georgiana, Duchess of Devonshire. The story of Georgiana was certainly meant for the big screen. You know a movie is good when you are still thinking and talking about it days later. This is that kind of a movie.
The movie is superbly cast. Ralph Fiennes as the cold Duke of Devonshire and Keira Knightly as the beautiful Georgiana are so convincing I was transported right back to the late 18th century. The movie can't help but be beautiful with it's English scenery, classical stately homes and period Georgian furnishings. I loved the Wedgwood-style decor and the exquisite English tea sets throughout the movie.
Since the movie is based on a true story I was deeply stirred by the oppression of women in this era. Trapped in a loveless arranged marriage, Georgiana is forced to tolerate her husbands mistresses and denied herself to be with her true love, Charles Grey. In one scene Georgiana says "I am a prisoner in my own home". The movie clearly delivers the message that women were bound by traditon and had no rights. Any notion of womens rights were tightly cinched just like their corsets! 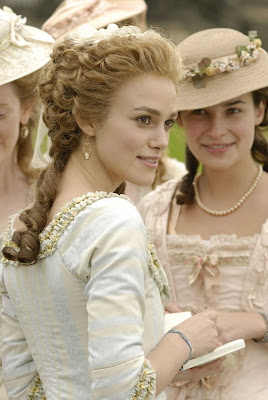 Speaking of corsets...the fashions, hats and jewelry in this movie are gorgeous. My eyes were glued to the screen admiring all the Georgian jewelry designs. I loved the chokers and the cameos. Get ready to pull out your Great-Grandmother's jewelry box...I think this movie will start a fashion trend revival of romantic vintage and costume jewelry.

The movie still in limited release will open everywhere this Friday, October 10, 2008.