Is There a Santa Claus? 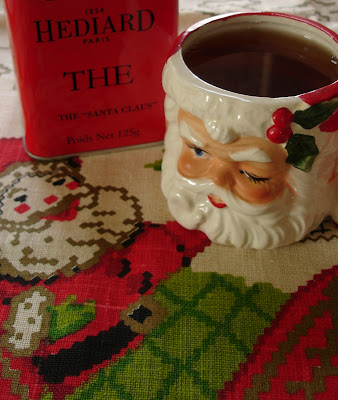 You'll get a wonderful whiff of French vanilla, caramel, orange, clove and cinnamon when you open the lid on this shiny red caddy.  Hediard even says "leave a mug out for an appreciative Santa"! 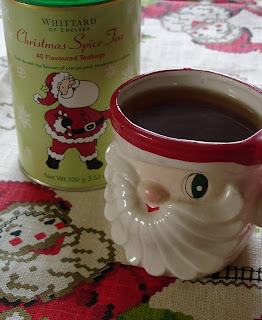 
Another one of my favorite Christmas teas is Whittard of Chelsea's Christmas Spice Tea.  For years I only drank British tea and after several trips to London, Whittard's became my favorite British "cuppa".  I've discovered many tea companies since but I highly recommend any of Whittard's teas.
Whittard's Christmas Spice Tea is similar if not the same blend as their Spice Imperial Tea so you can actually enjoy this spicy blend anytime of the year.  It's a premium black tea with the flavors of orange peel, cinnamon and spices.  Trust me when I say, Whittard knows how to blend good teas...they've been expert tea blenders since 1886.
Oh, how I love to shop their London branch stores.
Both of these wonderful teas are available only online to purchase.  If you have a friend taking a trip to Great Britain or Paris you can always ask them to bring you home a caddy or two!

And because I believe in Santa Claus, I've given Santa a list of teas I hope to find underneath my Christmas tree!  I hope Santa brings you some fabulous tea, too!


(In the photos:  Lisette's childhood Santa mugs and the Vintage Holiday Tea Towels are for sale here in Boutique Lisette.)
Posted by Unknown at 5:43 PM

I have always loved the Santa Mugs.