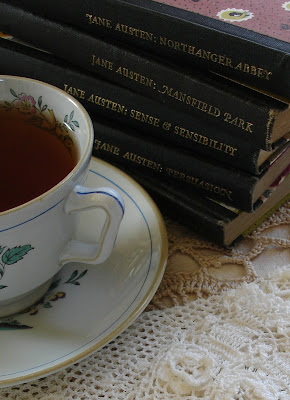 Tea with Jane Austen
"You must drink tea with us tonight."
from Sense & Sensibility

If I could take afternoon tea with anyone from the past or present,
it would have to be Jane Austen.
Jane was a tea drinker.  Tea was an important part of Jane's daily life in the Regency era.  Did you know that Jane was even the keeper of the keys to the tea cabinet in her Chawton home?  Her mother and sister Cassandra were key keepers,too.  Back in Jane's day, tea was precious and stored in a locked tea caddy or cabinet.
If I could invite Jane to tea, I would open my tea cabinet and introduce her to Earl Grey.  Earl Grey is one of my favorite teas and it was not a tea blend until well after Jane Austen's (1775-1817) life.  I think Jane would like Earl Grey tea or better yet...Lady Grey! 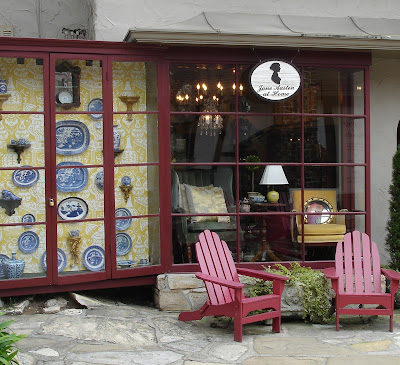 Jane Austen at Home
Now this is a shop that Jane herself would love...not just because of it's name but because of it's merchandise.  Just look at its wonderful display of blue and white china under lock and key in a creative exterior display.

On a recent trip to Carmel-by-the-Sea I discovered a tiny and quaint antique shop called Jane Austen at Home.  It's a charming shop filled with lots of tea cups and china.  I had a lovely chat with the owner of the shop.  She lived in London for many years and has a great sense of British style which shows throughout her tiny shop. 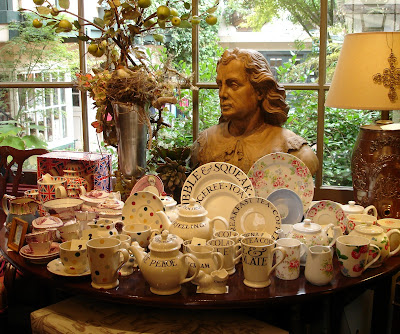 Tea Time China
Jane Austen at Home is filled to the brim with china and other fine English antiques.  On my trip there I noticed some lovely lusterware, Emma Bridgewater, Cath Kidston and antique British pottery.  It's hard to find Emma Bridgewater and Cath Kidston china on this side of the Pond so, of course, I had to treat myself to a tea cup purchase.  I'm sure Jane Austen would approve. 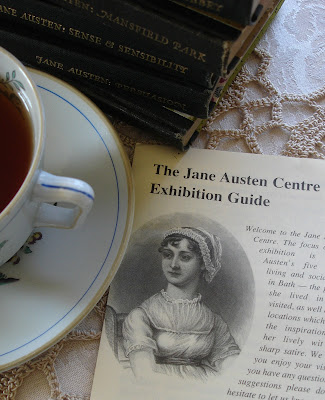 ﻿Taking Tea with Jane
Wouldn't it be lovely to go on a Jane Austen tea tour in England?
Well, last week I was at Crown & Crumpet in San Francisco and got the inside scoop from owner Amy Dean about Crown & Crumpet's Springtime Tea and Toast Tour next May in England.   Amy was like a tea kettle boiling over with all her enthusiasm about the tour.
According to Amy the tea tour will have a real Jane Austen feel to it. Amy is putting the finishing touches on the tour and potential Jane Austen stops are Hampshire and  Bath where Jane Austen lived.  Amongst many other fabulous tea events, Amy has a very special Pret-a-Portea tea for fashionistas at London's Berkeley Hotel planned and the Chelsea Flower Show wraps up the tour.

Amy lived and worked in England and met her British husband Christopher there.  She certainly has fabulous British connections (Amy even worked for Emma Bridgewater and is friends with Cath Kidston).   I'm sure her tea tour will be as delightful as her tea room.

Now I just have to find a way to go on the tour and then I can really have tea with Jane Austen.
***For information about the Crown & Crumpet Tea Tour visit their website and sign up on their mailing list.

Kathleen at Set to a Tea said...

Lisette,
Such a pleasure to find your blog!
In fact a friend sent me your way!
We seem to be kindred spirits too.
I look forward to keeping up with you and your posts!

Oooh! That is a lovely display of Bridgewater to choose from! I hope you can go on that tour next year, it sounds fab!