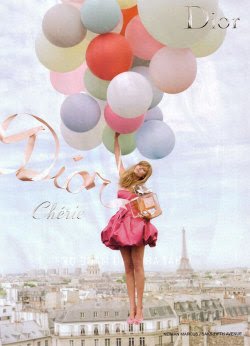 Take me to Paris!
Ooh, la, la..this ad makes me want to go to Paris!

Yesterday while at the hair salon I spotted this adorable ad for Miss Dior Cherie in Vogue magazine. Any view of Paris... always catches my eye!

The ad's rooftop view is similar to the view my husband and I once shared on at the rooftop cafe at the Parisian department store La Samaritaine. We had our very first Croque-Monsieurs enjoying this same spectacular view of the Eiffel Tower. Sadly this landmark department store and restaurant have been closed for years now for security reasons. 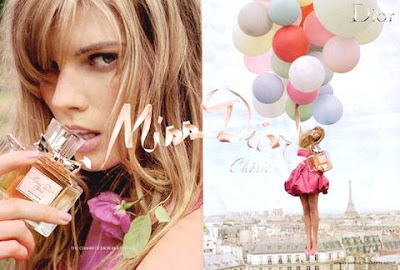 So Chic! So French!
Then last night I saw the Miss Dior Cherie television commercial. It is so French and adorable. The beautiful young woman is seen prancing around Paris to a catchie French tune Moi je joue sung by Brigitte Bardot. The commercial makes me want to go to Paris even more!
The ad campaign is clever, cute and catchie. No wonder. It is directed by Sofia Coppola!
As for Miss Dior Cherie, it is a new perfume by Dior. If you ask me, I think this darling new ad campaign is going to sell a lot more than just perfume. It is probably going to sell a few airline tickets to Paris, too! 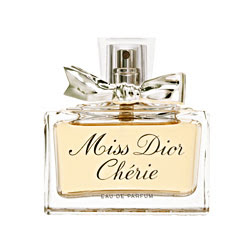 Miss Dior Cherie
Available at Nordstrom, Macy's and Sephora.
Posted by Unknown at 11:31 AM

That is the department store I was talking about when we went to Paris. When we went at night it was lit up all Pink. Did you notice on their website they are closed for security reasons? I wonder what that is all about?
I miss you!

Hi Knitique Girl, La Samaritaine has been closed for a few years now. I think it is due to safety issues within the old building.

Let's hope it is open when we go on your knitting tour of Paris!

Gabrielle and I saw the commercial today at the end of Oprah. So enchanting!
Jodi

Bonjour Jodi, Oui, doesn't the commercial make you want to jump on a plane to Paris!