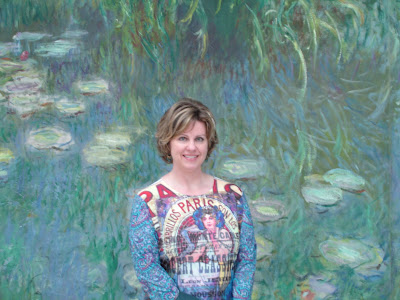 
It appears that a special art collector loves them,too! Monet's Le bassin aux nympheas (Water Lily Pond) sold today for over $80 million dollars at Christie's Impressionist & Modern Art Sale in London. It is the most expensive art sale in Europe for the auction house.


I have been fortunate to see Monet's waterlilies up close in Paris. I have admired his paintings at the Musse d'Orsay and at the Musee de l'Orangerie. Both experiences were incredible getting so close to the master's work.


Up close, his giant brush strokes appear quite primitive, almost childlike. Once you step back however, you are swept away by the tranquil beauty of water, lilies and reflection. He is undoubtedly, my favorite Impressionist artist.


I hope one day to visit his home and studio in Giverny (outside of Paris). At Giverny, he drew inspiration from his beloved waterlilies at his Japanese style lagoon. He was passionate about waterlilies the last 30 years of his life. His lagoon inspired some 250 oils alone. 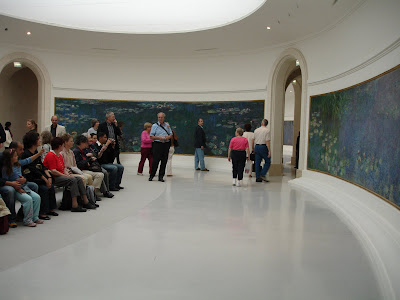 
Claude Monet had been painting waterlilies on vast canvases since 1914 at his Giverny studio. He worked on them until his death at 86. One year later in 1927, the Orangerie (an 1852 former orange green house in the Tuileries Garden), was transformed into a museum to house Monet's giant waterlily panels.


Eight panels were installed in two specially-designed, oval-shaped rooms in the Orangerie. Each panel is over six feet tall. If lined up side by side, they would measure nearly 300 feet long. They are magnificent! 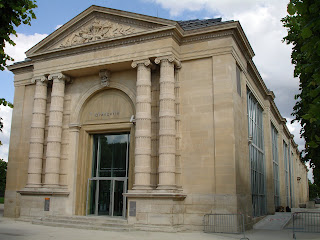 
The Musee de l'Orangerie had been closed for six years during a renovation makeover. It's long awaited re-opening was May 2006. Luckily for my husband and me, we just happened to be in Paris in May 2006! We stood outside in line for about an hour to get in the museum for it's re-opening debut. Once inside, we were awed by the giant panels by Monet.


Next time you are in Paris, be sure to visit this incredible museum in the Jardin des Tuileries (Tuileries garden)!
Posted by Unknown at 10:53 PM