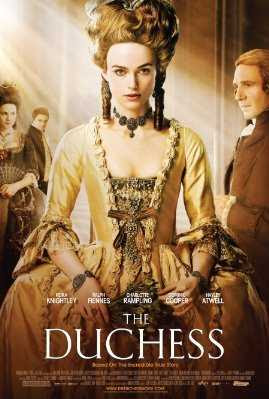 This movie is just my cup of tea! I love British period movies.

The Duchess movie is based on the best-selling novel Georgiana, Duchess of Devonshire by Amanda Foreman. The Duchess was born Lady Georgiana Spencer (1757-1806). Yes, the same famous aristocratic family the Spencers, ancestors of Diana, Princess of Wales.

Reviews say the The Duchess is sure to be this year's period drama. Starring Keira Knightly as the Duchess and Ralph Fiennes as the older Duke of Devonshire. It was filmed at National Trust properties across England.

Like her ancestor Princess Diana, the Duchess was famous for her beauty, sense of style and adored by the people. She was also in a loveless marriage to the much older Duke. Set in the late 18th Century the movie's storyline is about her search for love. 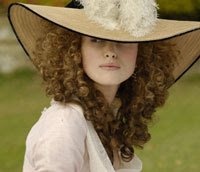 Georgiana, The Duchess of Devonshire

I can't wait for it's premier. Oh the history, the scenery, the stately homes, the costumes and, of course, the drama! I will probably go on opening day!
Posted by Unknown at 11:31 PM

Dear Lisette
I have seen the movie and really enjoyed it. I hope you do, too. It is pretty faithful to my book, for a movie. If you are interested in any background material to the film, you can always take a look at my web site, www.amanda-foreman.com.
Sincerely,
Amanda Foreman

Amanda, I am so thrilled that you commented on my post about The Duchess movie!
Myself and others are now trying to read your book before the movie debuts!
Kind regards,
Lisette