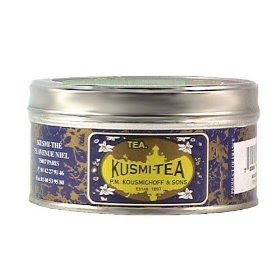 My latest tea find is Anastasia by Kusmi Tea. It's a French tea blend with a Russian past! It is inspired and named after the mysterious Russian Grand Duchess Anastasia.
Anastasia is a French Earl Grey blend with citron, et fleur d' oranger. English translation: a Russian blend of China and Ceylon teas with natural scents of bergamot (Earl Grey) lemon, lime and orange blossom. It is delicious as a French iced tea!

Kusmi Tea celebrated 140 years of tea business in 2007. It was founded by a Russian peasant in 1867 by a P.M. Kousmichoff (1840-1908). During the Russian Revolution his son moved the company's headquarters to Paris. Kousmichoff's Grandson eventually sold the business. Today Kusmi still operates with it's work shops in Paris.

I have often admired the baroque style Kusmi tea caddy tins in Paris. For years I thought it was a Russian Tea brand. After all, it's packaging and tea blend names are so Russian! I recently discovered that it is a French tea company, so voila, I had to try it.

Lucky for me I was at Dean and Deluca in the Napa Valley last week. D & D just happens to carry a small variety of Kusmi Teas amongst their import teas. I chose the Anastasia blend. I later discovered it is one of their top sellers, rivaling Prince Vladimir at the top spot. Oui, I will try Prince Vladimir next!

The next time I am in Paris, I hope to visit the Kusmi Tea store and restaurant.
Kusmi Tea and Restaurant
56, rue de Seine, Paris, 75017

If you get there before me...let me know how it is!
Posted by Unknown at 5:55 PM