Summer in a Jar 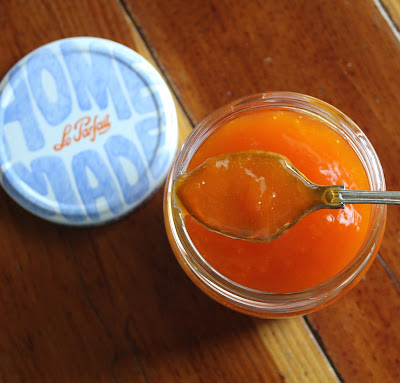 A few weeks ago, I captured summer in a jar with my first summer preserving project, Royal Blenheim Apricot Jam.  The recipe I used is by Bay Area jam expert, Rachel Saunders and can be found in her Blue Chair Jam Cookbook.   Since the recipe called for Blenheim apricots, I learned a thing or two about them, in the process. 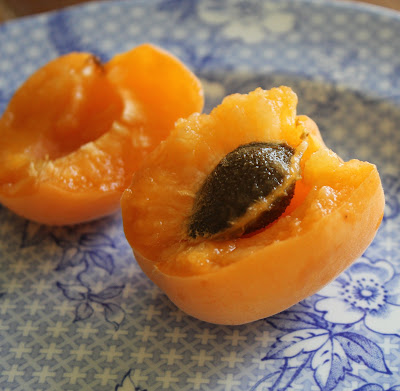 The beloved Blenheim apricot is an old heirloom variety and said to be the tastiest of all apricots.  It's name hails from Blenheim Palace in England where these apricots flourished in the gardens there and in Europe.  They arrived in California back in the late 1800's.  Today, they are considered a rare crop since many growers have abandoned them because they are fragile and difficult to ship.

A few weeks ago, I lucked out and picked-up a lug of Blenheim's from a nearby farm.  Then I made apricot jam. 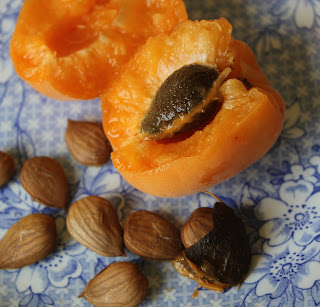 
Rachel's Royal Blenheim Apricot Jam recipe calls for 5-10 apricot kernels.  I've eaten apricots my entire life and had never heard of apricot kernels before.  Well now I know, if you crack open an apricot pit (gently with a hammer) there is a kernel inside.  And, the kernel looks and smells just like an almond.

Eager to learn more about the kernels,  I consulted a few of my cookbooks, including my French jam book, Mes Confitures.  I learned that the French call them apricot "almonds".  And, it is an old French technique to put one or two apricot "almonds" into each jar of apricot jam before sealing.

***A word of caution though:  Use apricot kernels at your own risk.  The kernels contain a compound which eaten in excess, may produce symptoms of cyanide poisoning.  Yikes! 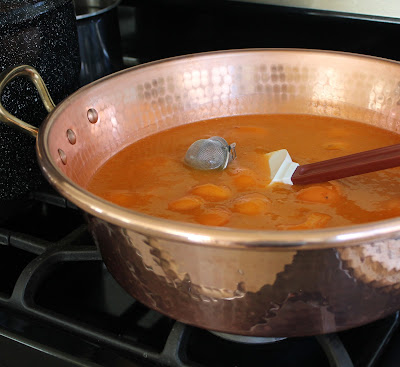 Equipped with my French copper jam pan, I decided to follow Rachel's recipe just as written.  I cracked opened about 10 apricot pits (chopped up a few) and filled a metal tea ball infuser with them. Being of French heritage, I liked the old tradition of using the apricot "almonds" in jam making.  I did feel a bit more at ease though, using them Rachel's way to infuse the jam rather than putting an entire kernel or two into each jam jar as my French ancestors probably did.

You may be wondering, do the apricot "almonds" really make a difference in the jam's taste?  They must because this was perhaps the most delicious jam, I have ever made! 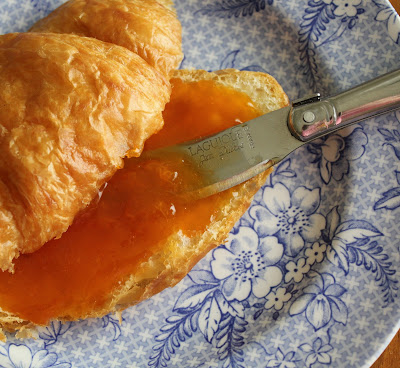 And Rachel says it best:
"Royal Blenheim apricots make a stellar jam.  The key is to use as little sugar as possible so as best to showcase this apricot's extraordinarily sumptuous flavor.  Among the many plain apricot jams I have tasted, the one is the best."