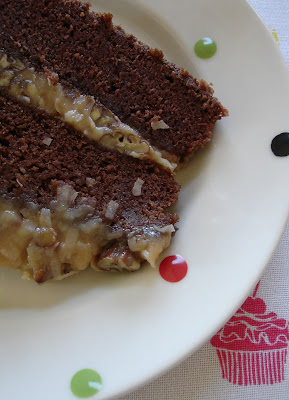 My husband requested a German Chocolate Cake for his birthday and my sweet Mother whipped one up for him since I've been sick with a lingering cold and not in a baking mood. 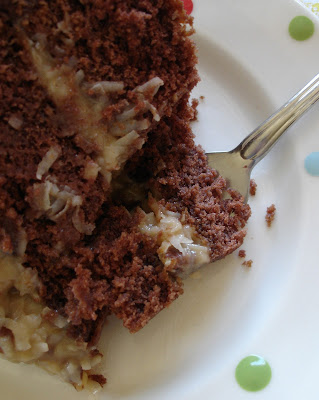 Some recipes can pass the test of time.  This is one!  My Mom sticks with the original German Sweet Chocolate Cake recipe printed on the Baker's German's Sweet Chocolate box.

Traditionally, this cake is baked in three round layer pans.  You can modify it and make it a two layer cake or, for ease, a sheet cake, too.  If you're like me and think the coconut-pecan frosting is the best part, the more layers the better... for more frosting.

I'm anxious to experiment with the recipe and see how it works for cupcakes. 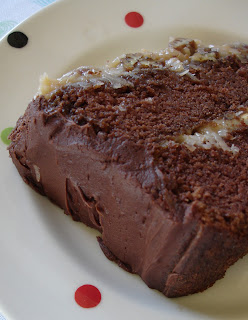 Based on it's name, many people think this cake originated from Germany.  That's not the case.  The cake is named after Sam German, who in 1852 invented a dark baking chocolate for the American baking company Baker's Chocolate Company.  This cake, Baker's German's Sweet Chocolate Cake was named after him.  In 1957 the recipe was published in a Texas newspaper and it's been a family favorite since then.  It certainly is one of our family favorites!

Special note:   this cake tastes even better the day after baking because the chocolate cake becomes more dense.